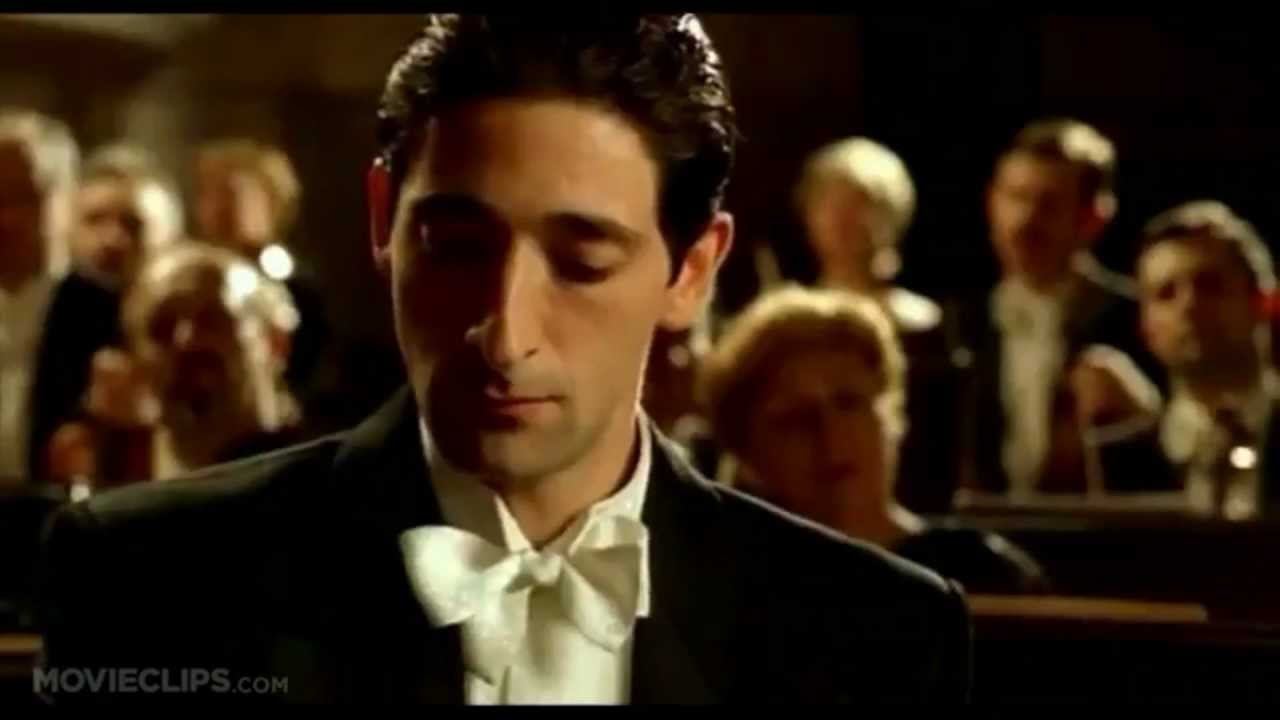 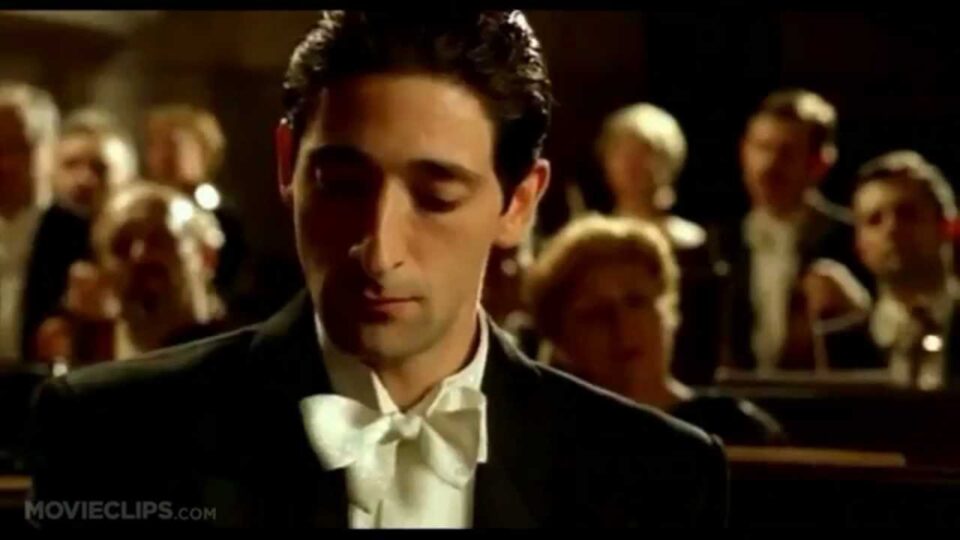 Pianist (2002) – is a good illustration of creativity’s role in motivating people to survive and thrive despite very challenging circumstances. Wladyslaw Szpilman, a young and talented Jewish pianist and his loving, smart and caring family are caught in the horrors of World War II Warsaw, Poland. Despite the incredible cruelty of Nazis, Szpilman, finds the subtlety and sublime of his art and creativity to survive.

The Independent
Rarely has the sheer claustrophobia of living in the Warsaw Ghetto been so vividly conveyed as it is by Szpilman.

The Observer
[Szpilman's] shock and ensuing numbness become ours, so that acts of ordinary kindness or humanity take on an aura of miracle.

The Daily Telegraph
[Szpilman's] account is hair-raising beyond anything Hollywood could invent…an altogether unforgettable book.

On September 23, 1939, Wladyslaw Szpilman, a young Warsaw pianist, played Chopin’s “Nocturne in C Sharp Minor” live on the radio, while German shells exploded outside — so loudly that he couldn’t hear his piano. It was the last live music broadcast from Warsaw: Later that day, a German bomb destroyed the power station, and Polish Radio went off the air.

The war cast Warsaw into the horror of occupation, the ghetto, the rounding up of the Jews, the uprising and the evacuation of the city — events that killed most of Szpilman’s friends and all of his family. But incredibly he survived among the ruins of his beloved city. The Pianist is both an extraordinary story of one man’s tenacity in the face of death, and a testament to the resilience of humanity itself — Szpilman’s life was saved by a German officer who heard him play the same Chopin nocturne on a piano found among the rubble. That officer died in a Russian POW camp, but he left behind a diary expressing his fierce despair at the barbarity of National Socialism. Extracts from the diary are published here for the first time, alongside Szpilman’s memoir.

Michael Frank — Los Angeles Times Book Review
…a significant contribution to the literature of remembrance, a document of lasting historical and human value. Unforgivably overlooked since its publication (in Polish) in 1946 and translated into English just now for the first time, the book is a relative rarity: an account of the Holocaust written in the immediate aftermath of the experience itself. It has all the rawness and specificity of horrors painfully and uncomprehendingly withstood and afterward just as uncomprehendingly — but necessarily — recorded. Writing this book would seem to have been a further act of survival by a man who performed more of them in six years than most human beings do in a lifetime.

Publishers Weekly – Publisher’s Weekly
Originally published in Poland in 1945 but then suppressed by the Communist authorities, this memoir of survival in the Warsaw Ghetto joins the ranks of Holocaust memoirs notable as much for their literary value as for their historical significance. Szpilman, a Jewish classical pianist, played the last live music broadcast from Warsaw before Polish Radio went off the air in September 1939 because of the German invasion. In a tone that is at once dispassionate and immediate, Szpilman relates the horrors of life inside the ghetto. But his book is distinguished by the dazzling clarity he brings to the banalities of ghetto life, especially the eerie normalcy of some social relations amid catastrophic upheaval. He shows how Jewish residents of the Polish capital adjusted to life under the occupation: “The armbands branding us as Jews did not bother us, because we were all wearing them, and after some time living in the ghetto I realized that I had become thoroughly used to them.” Using a reporter’s powers of description, Szpilman, who is still alive at the age of 88, records the chilling conversations that took place as Jews waited to be transported to their deaths. “We’re not heroes!” he recalls his father saying. “We’re perfectly ordinary people, which is why we prefer to risk hoping for that 10 per cent chance of living.” In a twist that exemplifies how this book will make readers look again at a history they thought they knew, he details how a German captain saved his life. Employing language that has more in common with the understatement of Primo Levi than with the moral urgency of Elie Wiesel, Szpilman is a remarkably lucid observer and chronicler of how, while his family perished, he survived thanks to a combination of resourcefulness and chance.

KLIATT
This Holocaust memoir was written by a Polish pianist and composer, who, although a Jew, lived through the German occupation of his home city of Warsaw. Written in 1945, apparently without any expectation of publication, it is an unusual book that gives the reader the memories of a victim still in shock, unconcerned with enhancing his story for easy reading. This aspect makes this book frustrating at first, as little background information is given, some irrelevant information is included, and some important things are left out. Nevertheless, this book would be a valuable addition to a Holocaust collection and tells an amazing story of human survival despite unimaginably horrid conditions. Szpilman was a young man and a concert pianist of some renown when the Germans invaded Poland. His story tells of the increasing deprivation suffered by the Jews as the Germans imposed more and more restrictions on them. Ultimately, he and his family were rounded up to be sent to concentration camps, but through an inexplicable stroke of good luck, Szpilman was separated from his family and allowed to escape before boarding the train; he never saw the others again, and his guilt over this is described. For the next three years he lived in hiding in Warsaw, moving from place to place, eating when he could, occasionally finding work. The descriptions of his life are painful and brutal. There is some information about Jewish attempts at resistance, for which Szpilman did what he could. Ultimately, as Szpilman lay near death from starvation and cold, a German officer disgusted with his country’s actions saved his life. The book contains an astonishing appendix, added for later editions, of extracts fromthe diary of that heroic officer, and an epilogue, written by Wolf Biermann, explaining more about this German who saved many people during the war. The Pianist is not an easy book to read, due to its lack of literary finesse, but it contains much valuable information to add to a student’s understanding of the Holocaust. KLIATT Codes: SA—Recommended for senior high school students, advanced students, and adults. 1999, St. Martin’s/Picador, 222p, illus, 21cm, 99-36033, $13.00. Ages 16 to adult. Reviewer: Barbara Shepp; Chevy Chase, MD January 2001 (Vol. 35 No. 1)

Library Journal
Szpilman’s memoir of life in the Warsaw ghetto is remarkable not only for the heroism of its protagonists but for the author’s lack of bitterness, even optimism, in recounting the events. Written and published in a short run in Poland soon after the war, this first translation maintains a freshness of experience lacking in many later, more ruminative Holocaust memoirs.

Kirkus Reviews
A striking Holocaust memoir that conveys with exceptional immediacy and cool reportage the author’s desperate fight for survival and the German who came to his aid. When WWII broke out, Szpilman was a talented young Jewish pianist in Warsaw. Within a few years, he would be forced with his family into the Warsaw ghetto, where he supported them by playing in ghetto cafés. Szpilman’s memoir, suppressed by the Polish government shortly after its original publication in 1946, tells the story of the young man’s difficult survival in wartime Warsaw and the deportation and death of his entire family. With marked clarity and detachment, Szpilman takes us through the changing moods among the doomed population, moods determined by the merest whim or close calculations of the Germans. This is also a book about the power of music, which provides Szpilman the determination to go on and literally saves him several times. Several things distinguish this among Holocaust memoirs. Written immediately after the war, The Pianist is distant and cool in its emotional tone; we sense that the author has not yet processed his emotions. Yet the immediacy of his experiences is found on every page in the details of daily life in the ghetto and his months of hiding. This account also contains extracts from the diary of the German officer who saved Szpilman’s life. Captain Wilm Hosenfeld’s extraordinary reflections on the war and the epilogue by German writer Wolf Bierman describing the many times that Hosenfeld came to the aid of Jews and Poles are fitting companions to Szpilman’s memoir. They allow the reader to contemplate more personally the author’s marked lack of desire for revenge. After the war,Szpilman returned to his career playing for Polish Radio and in concert halls. What interested Szpilman (who still lives in Warsaw), and what comes through here, is not a desire for revenge, but the brute animal drive for survival.