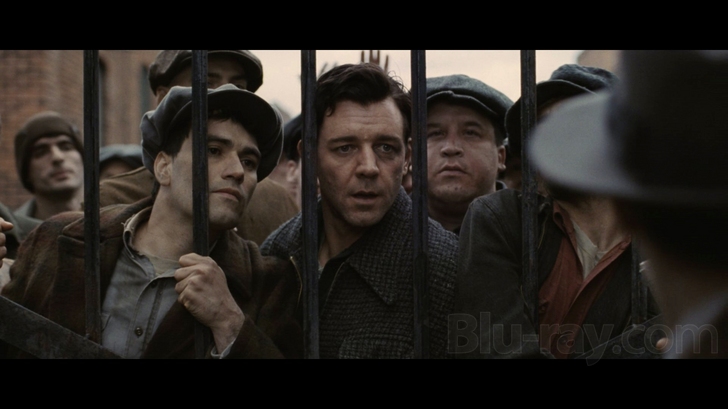 Cinderella Man (2005) – is the inspiring life of legendary athlete Jim Braddock, a once-promising light heavyweight boxer forced into retirement after a string of losses in the ring. As America plunges into the Great Depression of 1930s, Braddock accepts a string of dead-end jobs to support his family. A last minute cancellation finds Braddock in the ring against the second-ranked world contender–and to everyone’s amazement, Braddock wins in the third round. Despite being pounds lighter than his opponents and repeated injuries to his hands, Braddock continues to fight against challengers and win. The movie is an excellent illustration of hopes and dreams of the disenfranchised masses which dubs Braddock as “Cinderella Man.”

There is a moment early in “Cinderella Man” when we see Russell Crowe in the boxing ring, filled with cocky self-confidence, and I thought I knew what direction the story would take. I could not have been more mistaken. I walked in knowing nothing about Jim Braddock, “The Bulldog of Bergen,” whose riches-to-rags-to-riches career inspired the movie. My friend Bill Nack of Sports Illustrated, who just won the A.J. Liebling Award, the highest honour a boxing writer can attain, could have told me all about Braddock, but I am just as happy to have gone in cold, so that I could be astonished by Crowe’s performance.

I think of Crowe as a tough customer, known to get in the occasional brawl. Yes, he plays men who are inward and complex, as in “The Insider” and “A Beautiful Mind,” or men who are tempered and wise, as in “Master and Commander.” But neither he nor anyone else in a long time has played such a nice man as the boxer Jim Braddock. You’d have to go back to actors like James Stewart and Spencer Tracy to find such goodness and gentleness. Tom Hanks could handle the assignment, but do you see any one of them as a prizefighter? Tracy, maybe.

As the film opens, Braddock is riding high with a series of victories that buy a comfortable, but not opulent, lifestyle for his wife Mae (Renee Zellweger) and their children Jay, Rosemarie and Howard. Also doing OK is Braddock’s loyal manager Joe Gould (Paul Giamatti, in a third home run after “American Splendor” and “Sideways”). Then Braddock breaks his right hand, loses some matches so badly his license is taken away, and descends with his family to grim poverty in the early days of the Depression.

What is remarkable during both the highs and the lows is that Braddock, as Crowe plays him, remains level-headed, sweet-tempered and concerned about his family above all. Perhaps it takes a tough guy like Crowe to make Braddock’s goodness believable. Mae is just the wife he deserves, filled with love and loyalty, and so terrified he will be hurt that she refuses to attend his fights and won’t even listen on the radio.

Their poverty takes them from a nice family house to a cramped little apartment where there is no heat and hardly anything to eat. Braddock gets a job on the docks in Hoboken, slinging sacks of grain and coal, using his left arm because of his injured right hand, and although that job is a low point, it is also the secret to the left hook that will eventually get him named “Cinderella Man” by Damon Runyon.

The movie teams Crowe once again with director Ron Howard; they made “A Beautiful Mind” together, and the screenwriter of that film, Akiva Goldsman, co-wrote this one with Cliff Hollingsworth. They find human ways to mirror the descent into despair; the Braddock family’s poverty, for example, seems to weigh most heavily on the oldest son, Jay (Connor Price), who fears above all being sent away to live with “rich” relatives — rich here meaning those with something to eat. He steals a sausage from a butcher shop, is caught, and then, in a scene typical of Braddock’s gentle wisdom, is not punished by his father, but talked to, softly and earnestly, because his father instinctively knows why his son stole the sausage, and that the kid’s daring was almost noble.

Up to this point, there would not be a comeback, and no occasion for Damon Runyon nicknames. Braddock gets one more chance at a fight, as Gould edges him past the doubts of promoter Jimmy Johnston (Bruce McGill). Without much time to train, he takes on a leading contender, and to everyone’s amazement, wins the fight. One victory leads to another, and finally Gould is able to broker a title fight with the heavyweight champion Max Baer (Craig Bierko), who has killed two of his opponents and seems likely to kill the outweighed and outclassed Braddock.

What happens in the fight you will see. Ron Howard, Russell Crowe, Craig Bierko, the cinematographer Salvatore Totino and the editors Daniel P. Hanley and Mike Hill step into a ring already populated by the ghosts of countless movie fights, most memorably those in “Raging Bull,” “Million Dollar Baby” and the “Rocky” movies. They don’t try to outfight those movies, but to outmaneuver them emotionally. The closest connection is with “Million Dollar Baby,” also a film about a fighter whose deepest motivation is the fear of poverty (at a press conference, Braddock says he fights in order to be able to buy milk for his family). The visual strategy of the big fight is direct and brutal, but depends not so much on the technical depiction of boxing as on the development of the emotional duel going on in the ring. When an underdog fights from “heart” after his strength and skill are not enough, the result is almost always unconvincing — but not always.

“Cinderella Man” is a terrific boxing picture, but there’s no great need for another one. The need it fills is for a full-length portrait of a good man. Most serious movies live in a world of cynicism and irony, and most good-hearted movie characters live in bad movies. Here is a movie where a good man prevails in a world where every day is an invitation to despair, where resentment would seem fully justified, where doing the right thing seems almost gratuitous, because nobody is looking and nobody cares.

Jim Braddock is almost transparent in the simple goodness of his character; that must have made him almost impossible to play. Russell Crowe makes him fascinating, and it takes a moment or two of thought to appreciate how difficult that must have been.

The Diving Bell and the Butterfly (2007) - The film tells the remarkable tale of Jean-Dominique Bauby, a French editor, who suffered a stroke and was paralyzed by the inexplicable “locked in” syndrome when he was 43. Bauby’s only way of communicating with the outside world was by blinking with one eye, and after several dedicated helpers, he was able to speak through his seemingly irrelevant gestures and began to produce word. The movie depicts strengths of hopefulness and optimism despite significant challenges.

Gone with the Wind (1939) – Scarlett O’Hara is living during the tumultuous years of the Civil War in a society torn by every sort of strife. In addition, she must contend with the trials of unrequited love and romantic frustration.In spite of all these obstacles, Scarlett maintains her sense of hope and continues to strive toward a better future for herself.

Life is Beautiful (1998-Italian) – Guido is a charming Jewish man living in Italy during the rise of Fascism. His natural qualities allow him to put together a beautiful family, but soon he and his loved ones are shipped to a concentration camp and put into mortal danger. Guido never loses his cleverness, humor, or hope, protecting his young son from the horrors of the Holocaust by pretending that the whole affair is a game. The movie’s title sums up Guido’s approach to life.

Good Will Hunting (1997) – Will Hunting works as a janitor at MIT while recovering his life from a difficult past. His natural ability with math leads to his discovery by an award-winning professor, but also leads to conflict between different groups of friends and associates. Will’s hope that he can improve his future allows him to face his obstacles with strength and resolve.

Field of Dreams (1989)-  This is gentle touching movie, filled with baseball but indeed, it is not about baseball instead it is about a man (Kevin Costner) realizing his dreams and learning that sometimes you have to take a chance in life. The film depicts hope and optimism amidst highly improbable seemingly unrealistic odds.