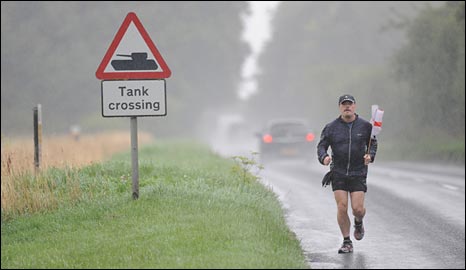 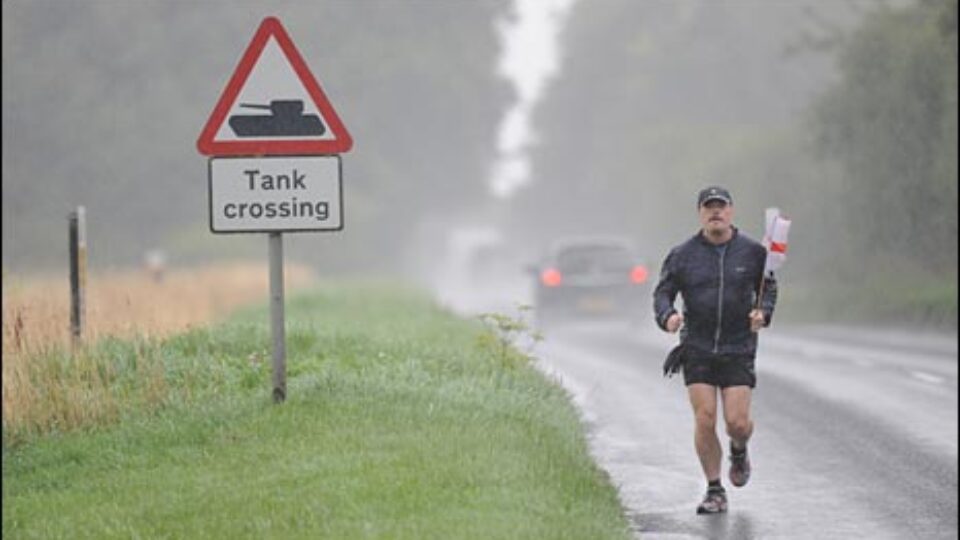 As a transvestite comic who is prone to put on weight and had never run farther than five miles, Eddie Izzard is not the obvious candidate to run 1,100 miles around Britain. But the 47-year-old stand-up and actor dragged his aching limbs in an astonishing 43 marathons in just 52 days.

Pausing in sight of St Albans Cathedral to demolish a chicken mayonnaise sandwich and chocolate biscuits, Izzard admitted his charity run from London to Cardiff, Belfast and Edinburgh, in aid of Sports Relief, had become “science fiction” and he was beyond exhaustion.

“If you imagine you drive in a tiny Mini across a wasteland where there is no petrol station and the petrol gauge is always on empty, that is me. I put a little in every night and the needle moves and then the next day I’m below empty again. I am falling asleep when I’m talking to people.”

Strapping up his aching ankles and horrific blisters on his toes, Izzard will attempt a personal best today with a sub-five-hour marathon. The best time he has recorded so far is five hours 48 minutes.

Izzard undertook just five weeks’ training in preparation for the marathons, which began on 26 July. He has run at least a marathon every day – sometimes as much as 31 miles – with just one rest day a week and a couple of days for travel to Northern Ireland.

Twittering as he went, Izzard has run with a modest support team, consisting of his tour manager, a sports therapist and an ice-cream van, which dispenses free ice-creams as he goes.

In St Albans yesterday, people cheered and beeped their car horns in support. At times, he has taken on the character of a Pied Piper in his run. Izzard said one highlight was when he paused at a fast food drive-through to eat a burger and a group of girls decided to run with him. Some teenage boys then kept up with him for five miles. In Liverpool, two teenagers on bikes thought Izzard was flagging so they rode with him for miles to support him.

Izzard said a high point during his marathon was running up Arthur’s Seat in Edinburgh. The low point was two weeks into his marathon running.

“My feet started coming apart,” he said. “They got bloated with water, swelled up and rubbed up against my shoes. Every step was painful.”

He has been trying to take in 5,000-6,000 calories a day, starting with porridge in the morning and with cakes in the afternoon. But the 43 marathons have been made harder by his failure to sleep properly at night.

“My lack of ability to rest and recuperate has been the hardest thing,” he said. “If you over-train you don’t sleep and this is the ultimate over-training.”

His friends and family were not surprised when he decided to undertake 43 marathons, he said.

“When you’ve done gigs in French before, nobody is really surprised when you say you are going to run 43 marathons,” he said.

He appreciated the welcome he got wherever he went and particularly enjoyed being in the countryside. There is just one problem: when he tells people he has run 43 marathons they think he is joking.

Along the way, Izzard – who now calls himself an “action transvestite” – was nearly run over on the A77 in Stranraer and, high on adrenalin, staged an impromptu gig in Penrith.

As well as raising thousands for Sports Relief, Izzard hopes to inspire people to embrace the London Olympics.

“We’ve never really had that party to celebrate the Olympics but sometimes you’ve got to grab these things and go for it. The Americans went to the moon. The Olympics is our going-to-the-moon.”