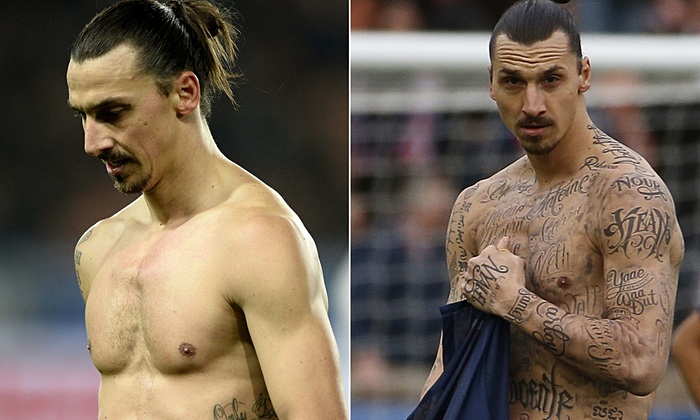 Zlatan Ibrahimovic’s: tattoos to draw attention to a global issue

Back in February, Paris Saint-Germain striker Zlatan Ibrahimovic peeled off his shirt after his goal in the second minute against rivals Caen to reveal his body entirely covered in tattoo names. He was shown a yellow card for doing so and received a match ban, but why did he do it?

“When I took my shirt off against Caen, everybody asked what these new tattoos were. I had 15 removable tattoos on my body, they are the names of real people who are suffering from hunger in the world,” Ibrahimovic said on Sunday. “[While] those tattoos have gone now, these people are still here … I hope that you can see them through me.”

The Swede said he agreed to the venture to raise awareness for the United Nations’ World Food Program – which fights against hunger worldwide.

“Wherever I go people recognise me, call my name, cheer me. But there are names no one cheers for,” the imposing Sweden forward said. “If I could, I would write every single name on my body. But there are 805 million people suffering from hunger in the world today … So whenever you hear my name, you will think of their names. Whenever you see me, you will see them.”

Marina Catena, director of the WFP in France, said that Ibrahimovic’s huge worldwide popularity made him the ideal person to work with.

“I had a dream that someone could convey this message in a simple way. We thought of Zlatan Ibrahimovic, who is always asked for his autograph,” Catena said. “So why shouldn’t it be Zlatan who has the autographs on his body this time? We’re proud that he accepted to convey this message.”

Regardless of whether you believe he did it for his own personal publicity … who really cares when it raises the awareness if such an important global cause!

To read the original article on The Guardian newspaper click here