Lily Robinson (who insists that she is three and a half years old) was quite confused by one of Sainsbury’s products called ‘tiger bread’. In her eyes, the bread didn’t resemble a tiger at all, and in fact looked very much like a giraffe.

It’s hard to disagree with her!

With a little assistance from mum and dad, she wrote a letter to Sainsbury’s customer service department. 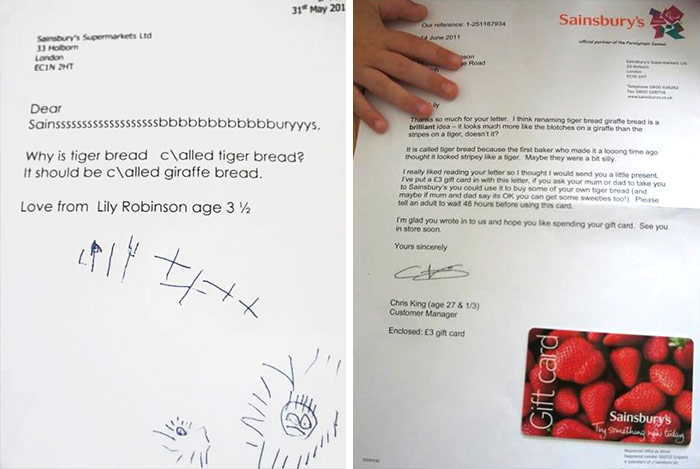 To her surprise, customer support manager Chris King (age 27 and one-third) told her that he couldn’t agree more. He explained the origins of the name:

“I think renaming tiger bread giraffe bread is a brilliant idea – it looks much more like the blotches on a giraffe than the stripes on a tiger, doesn’t it? It is called tiger bread because the first baker who made it a loooong time ago thought it looked stripey like a tiger. Maybe they were a bit silly.”

Lily’s mom enjoyed the letters and ended up posting them on her blog. Before long, this cute correspondence was a viral hit, and the pressure was on for Sainsbury’s to change the name of the product to the much more appropriate giraffe bread.

Knowing the customer was certainly right in this instance—and spotting an unusual opportunity to do something fun—Sainsbury’s changed the name of the bread and put signs around their stores that give a humorous nod to Lily’s original idea.