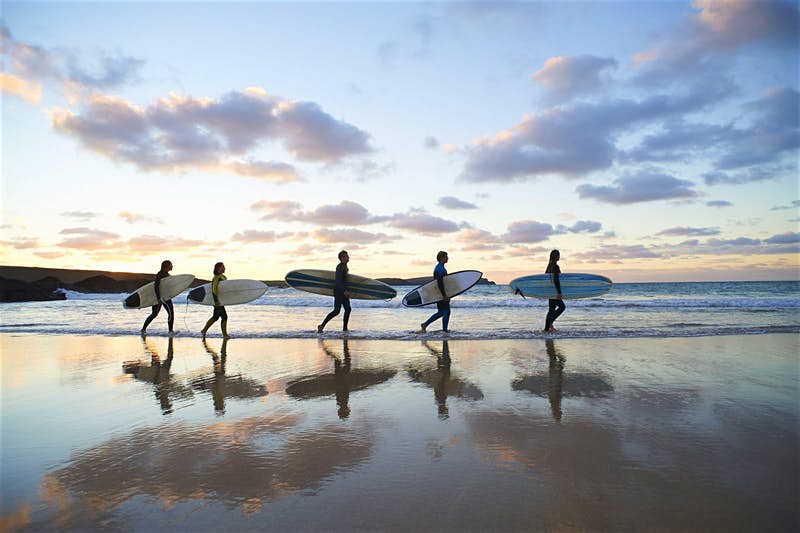 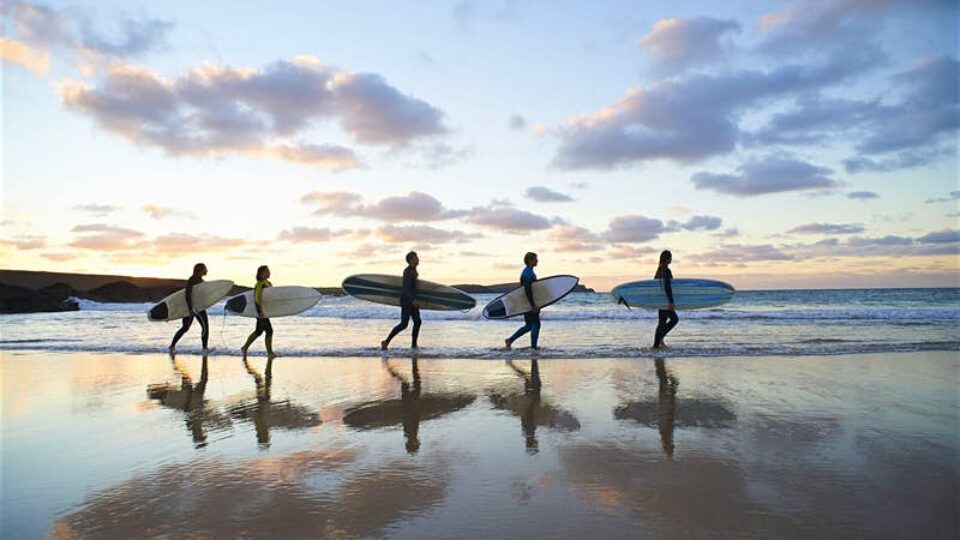 The Best Places to Learn to Surf in the UK

Learn to surf? In the UK? It might not have the same allure as the tropics, but with almost 20,000 miles of coastline peppered with world-class breaks, Britain is actually an excellent place to get started.

The biggest swells roll in between autumn and spring, but the season is year-round for beginners, with smaller summer waves perfect for learning.

Read on for six of the best spots to give it a go.

When the swell is up – delighting local experts with clean barrels topping 2m – this Welsh beach can rival any surf spot in Europe. But Rest Bay boasts rideable waves on any given day, which is all that learners need. Better yet, this little-known spot is one of the closest surf beaches to Cardiff, Bristol and even London, the latter just two and a half hours away by train from nearby Bridgend.

Several excellent surf schools operate in the area, including Porthcawl Surf School (porthcawlsurf.co.uk) and Cressy’s Surf Academy (cresseyssurfacademy.com). Porthcawl Surf School also rents boards in the car park opposite the beach. Beginners are advised to surf directly in front of the car park; be aware of the rip currents that pull towards the rocks as the tide pushes in.

If the crowds get too much in nearby Newquay, the home of British surfing, the next bay to the north with its two miles of beach (at low tide, at least) is a great alternative. You’re spoiled for choice when it comes to surf schools operating around Watergate Bay, with good bets including Xtreme Academy (extremeacademy.co.uk) and O’Neill Surfing Academy (facebook.com).

The surf scene here is well developed; learn the ropes with the likes of Tynemouth Surf Co (tynemouthsurf.co.uk), which has a surf shop with equipment rental right on the seafront, or Longsands Surf School (longsandsurf.com). That’s not to say it gets particularly crowded here, however – sea temperatures averaging 15°C at the height of summer demand a special kind of commitment (think booties and gloves on top of a 5mm wetsuit). Warm up in the Tynemouth Surf Cafe (tynemouthsurfcafe.co.uk), just back from the beach, after your lesson.

Conveniently for visitors, the beach has its own website (sauntonbeach.info) with links to local accommodation options, places to eat, surfboard hire and lessons. If you’ve been admiring the locals hanging ten, pick up some longboarding tips from British champ Sarah Whitely, who runs the local Walking on Waves surf school (walking-on-waves.com).

If you’re driving, get here early – the small car park tends to fill up fast. It’s easy, however, to find your own spot along this two-mile beach. Those looking for a more challenging break will find it around the corner in Croyde Bay, just north of Saunton.

It might get chilly up here, but Northern Ireland offers some of the best surfing in the UK. Its well-established scene is centred on the north coast, with the seaside resort town of Portrush its hub. Hit the waves with award-winning Troggs Surf School (troggssurfschool.com), or with pro-surfer-led outfits such as Portrush Surf School (tksurfschool.com), run by Irish national team surfer TK Kelly, and Long John’s Surf Academy (longjohns-surfacademy.com), helmed by Irish longboard champion ‘Long’ John McCurry.

If you’re brave enough to venture into the icy waters of Scotland, you’ll be rewarded with lineups largely to yourself year-round. Just outside the appealing town of Dunbar, 30-odd miles east of Edinburgh, shallow Belhaven Bay offers a perfect environment for beginners. Coast to Coast Surf School (c2csurfschool.com) runs surf lessons here from March through November. On flat days, you can also opt for a stand-up paddle board session with C2C, or try your hand at coasteering. The O’Neill Surf Academy of Scotland also offers lessons at Belhaven and surrounding beaches through Momentum Surf Shop (momentumsurfshop.com) in Edinburgh.