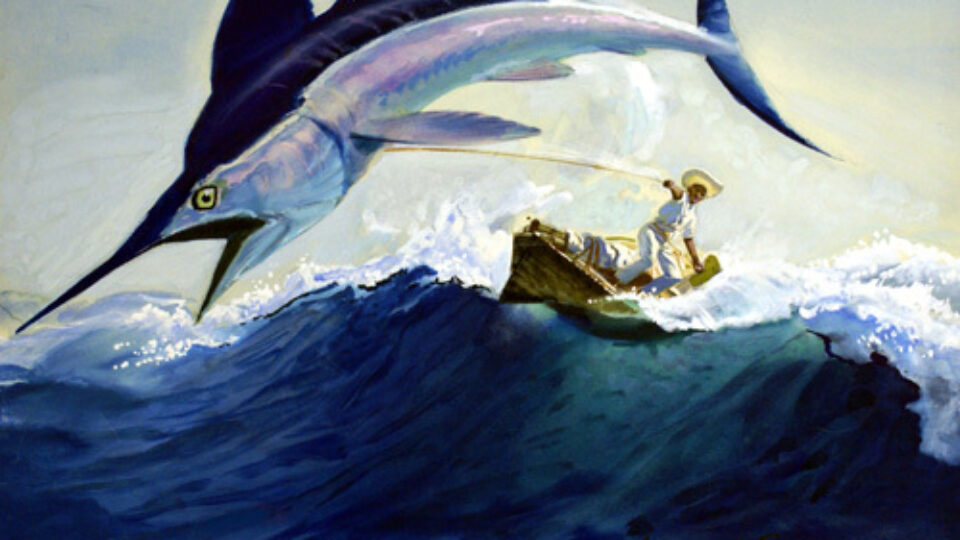 The Old Man and the Sea was the last major work Ernest Hemingway published in his lifetime. The simple story is about an old man who catches a giant fish in the waters off Cuba, only to have it devoured by sharks. Defeated, he returns home with the fish’s skeleton attached to the boat. Many consider this spare novel to be Hemingway’s best work.

1. Hemingway wrote the novel to prove he wasn’t finished as a writer.

When The Old Man and the Sea was published in 1952, Hemingway hadn’t written a significant literary work for over a decade. His last successful book, For Whom the Bell Tolls, came out in 1940. To make matters worse, his 1950 novel Across the River and Into the Trees was panned by critics. People were saying that Hemingway was “through” as a writer. He began The Old Man and the Sea to prove that not only was he still in the writing game, he had yet to produce his best work.

2. The story had been in his mind for years.

In 1936, Hemingway wrote an essay for Esquire that contained a paragraph describing an “old man fishing alone in a skiff out of Cabañas” who hooked a big marlin that dragged him eastward for two days. The man killed the fish and then fought off sharks attracted to its blood. When the man was finally picked up, “what was left of the fish, less than half, weighed eight hundred pounds.” Two years later, Hemingway started writing The Old Man and the Sea, but then got sidetracked by For Whom the Bell Tolls. By the time he returned to the story, it had been percolating in his brain for at least 16 years.

3. The old man was based on a blue-eyed Cuban named Gregorio Fuentes.

Although Hemingway said the old man, Santiago, was based on “nobody in particular,” he most likely used aspects of his fishing buddy Gregorio Fuentes when developing the character. Like Santiago, Fuentes was gaunt and thin, had blue eyes, came from the Canary Islands, and had a long, battle-scarred history as a fisherman. Fuentes was the captain of Hemingway’s boat and the two frequently talked about the novel.

4. The fish was an Atlantic Blue Marlin.

While living in Florida and Cuba, Hemingway frequently fished for marlin in his boat, the Pilar. Not to be confused with a swordfish, Atlantic Blue Marlin are large billfish that live in the temperate and tropical regions of the Atlantic Ocean. They can get up to 14 feet long and weigh 2,000 pounds. Like in the book, a common predator is the white shark.

5. The book was dedicated to recently deceased friends.

The dedication in The Old Man and the Sea reads “To Charlie Scribner And To Max Perkins,” both friends who passed away before the book came out. Max Perkins, who also edited F. Scott Fitzgerald and Thomas Wolfe, died in 1947 and Scribner, who was president of Charles Scribner’s Sons, died in 1952. They were among many of Hemingway’s literary peers who died in the preceding decade, including Fitzgerald, Gertrude Stein, Sherwood Anderson, and James Joyce.

6. Hemingway claimed there was no symbolism in the book.

The fable-like structure of the novel suggests that the story is symbolic, which is why many view The Old Man and the Sea as an allegory. But Hemingway thought all that was bunk—or at least, that’s what he said. “There isn’t any symbolism,” he wrote to critic Bernard Berenson. “The sea is the sea. The old man is an old man … The sharks are all sharks no better and no worse. All the symbolism that people say is shit. What goes beyond is what you see beyond when you know.”

7. He believed the novel was his finest work.

When Hemingway sent the manuscript to his editor, Wallace Meyer, he said, “I know that it is the best I can write ever for all of my life, I think, and that it destroys good and able work by being placed alongside of it.” Then he added that he hoped it would “get rid of the school of criticism that I am through as a writer.”

Life featured an excerpt of The Old Man and the Sea in its September 1952 issue. The five million copies of the magazine sold out in two days. Luckily, you can peruse the original yourself online.

9. The Old Man and the Sea made Hemingway a celebrity.

Of course, Hemingway was a known and respected author beforehand, but The Old Man and the Sea elevated his reputation to the literary giant we think of today. Critics loved the book. It won the 1953 Pulitzer Prize and was cited as a reason Hemingway won the 1954 Nobel Prize. It was also a best seller and made Hemingway a fortune. In 1955, it was made into a movie starring Spencer Tracy.

The following is a one-paragraph review Faulkner wrote about The Old Man and the Sea, published in Shenandoah:

“His best. Time may show it to be the best single piece of any of us, I mean his and my contemporaries. This time, he discovered God, a Creator. Until now, his men and women had made themselves, shaped themselves out of their own clay; their victories and defeats were at the hands of each other, just to prove to themselves or one another how tough they could be. But this time, he wrote about pity: about something somewhere that made them all: the old man who had to catch the fish and then lose it, the fish that had to be caught and then lost, the sharks which had to rob the old man of his fish; made them all and loved them all and pitied them all. It’s all right. Praise God that whatever made and loves and pities Hemingway and me kept him from touching it any further.”

11. You can watch the Oscar-winning stop-motion film of the book.

This stop-motion animation of The Old Man and the Sea was made by Russian animator Aleksandr Petrov. The film uses 29,000 images that he and his son, Dimitri, painted on glass over two years. It’s no wonder it won the 2000 Academy Award for Animated Short Film.