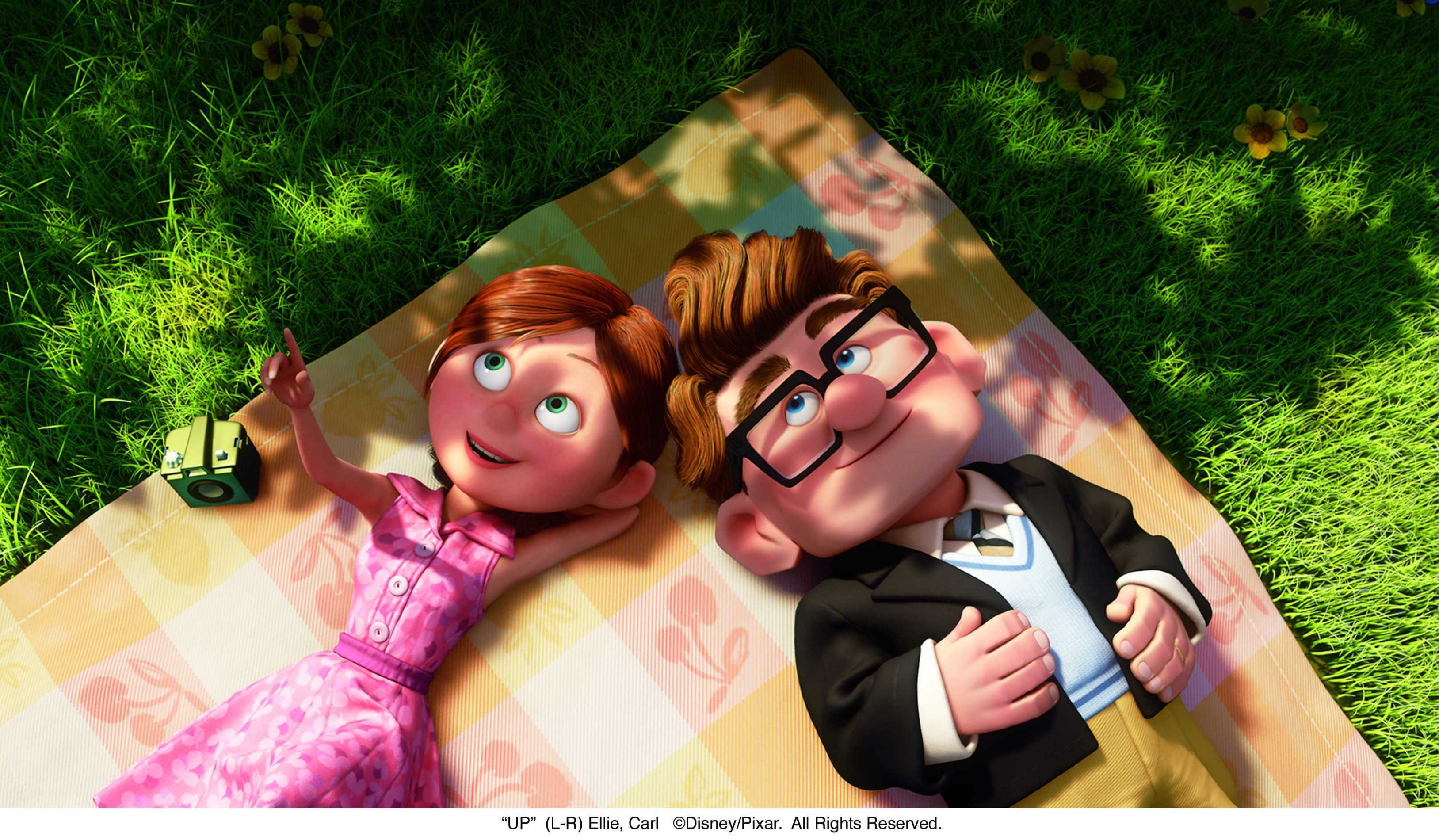 One of the Most Extraordinarily Openings to a Film Ever Crafted

Watch one of our favourite posts …

This wonderful opening sequence to the film ‘UP’ shows a lifetime of fun, love and regrets in 4 minutes. Each time I watch I want to tell my family how much I love them, and that we all need to live life now! Don’t wait until its too late…

This movie is remarkable for a brilliant montage sequence at the very beginning, sketching out Carl’s early married life with childhood sweetheart Elie,” writes Peter Bradshaw. “It is a masterclass in narrative exposition, and the moments explaining their childlessness will bring a lump to your throat.”

“It’s one of the most extraordinarily openings to a film, far less an animated film, ever to have been crafted,” agrees the Telegraph’s Sukhdev Sandhu. “It dares to risk alienating the young children all the poster and ad campaigns would suggest it’s aimed at. Against the tendency of studios to appease older viewers with a stream of double-entendres and in-jokes, it deluges them with more heart-on-sleeve emotion than a romantic weepie.” 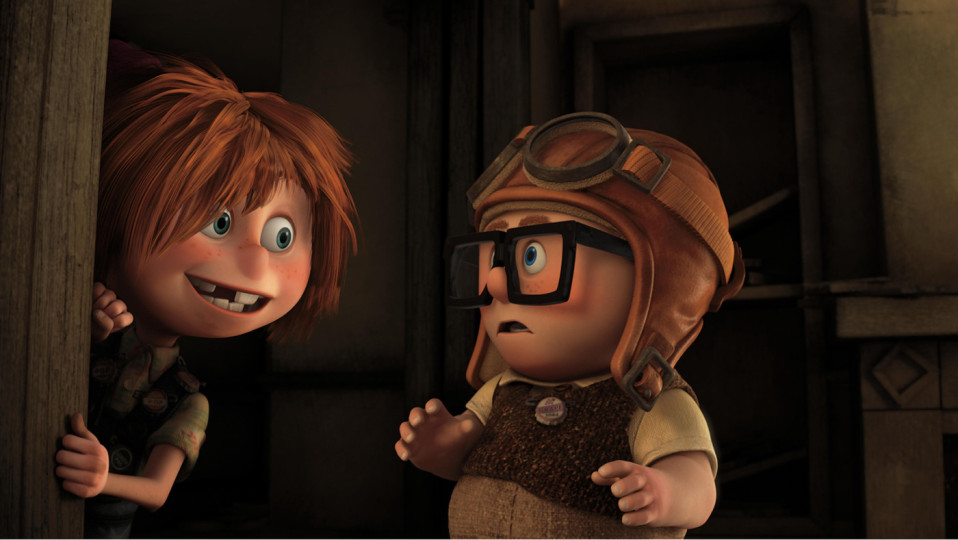 “Up” is a wonderful film, with characters who are as believable as any characters can be who spend much of their time floating above the rain forests of Venezuela. They have tempers, problems and obsessions. They are cute and goofy, but they aren’t cute in the treacly way of little cartoon animals. They’re cute in the human way of the animation master Hayao Miyazaki. Two of the three central characters are cranky old men, which is a wonder in this youth-obsessed era. “Up” doesn’t think all heroes must be young or sweet, although the third important character is a nervy kid.

This is another masterwork from Pixar, which is leading the charge in modern animation. The movie was directed by Pete Docter, who also directed “Monsters, Inc.,” wrote “Toy Story” and was a co-writer on “WALL-E” before leaving to devote full time to this project. So Docter’s one of the leading artists of this latest renaissance of animation.

The movie will be shown in 3-D in some theaters, about which I will say nothing, except to advise you to save the extra money and see it in 2-D. One of the film’s qualities that is likely to be diminished by 3-D is its subtle and beautiful color palette. “Up,” like “Finding Nemo,” “Toy Story,” “Shrek” and “The Lion King,” uses colors in a way particularly suited to its content.

“Up” tells a story as tickling to the imagination as the magical animated films of my childhood, when I naively thought that because their colors were brighter, their character outlines more defined and their plots simpler, they were actually more realistic than regular films. 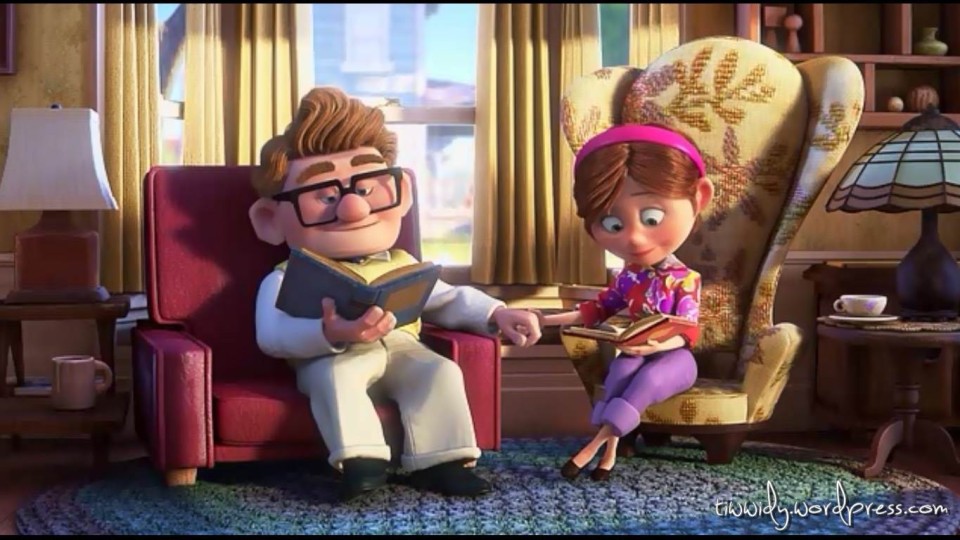 It begins with a romance as sweet and lovely as any I can recall in feature animation. Two children named Carl and Ellie meet and discover they share the same dream of someday being explorers. In newsreels, they see the exploits of a daring adventurer named Charles Muntz (Christopher Plummer), who uses his gigantic airship to explore a lost world on a plateau in Venezuela and then bring back the bones of fantastic creatures previously unknown to man. When his discoveries are accused of being faked, he flies off enraged to South America again, vowing to bring back living creatures to prove his claims.

Nothing is heard from him for years. Ellie and Carl (Edward Asner) grow up, have a courtship, marry, buy a ramshackle house and turn it into their dream home, are happy together and grow old. This process is silent, except for music (the elder Ellie doesn’t even have a voice credit). It’s shown by Docter in a lovely sequence, without dialogue, that deals with the life experience in a way that is almost never found in family animation. The lovebirds save their loose change in a gallon jug intended to finance their trip to the legendary Paradise Falls, but real life gets in the way: flat tires, home repairs, medical bills. Then they make a heartbreaking discovery. This interlude is poetic and touching.

The focus of the film is on Carl’s life after Ellie. He becomes a recluse, holds out against the world, keeps his home as a memorial, talks to the absent Ellie. One day he decides to pack up and fly away — literally. Having worked all his life as a balloon man, he has the equipment on hand to suspend the house from countless helium-filled balloons and fulfill his dream of seeking Paradise Falls. What he wasn’t counting on was an inadvertent stowaway, Russell (Jordan Nagai), a dutiful Wilderness Explorer Scout, who looks Asian American. 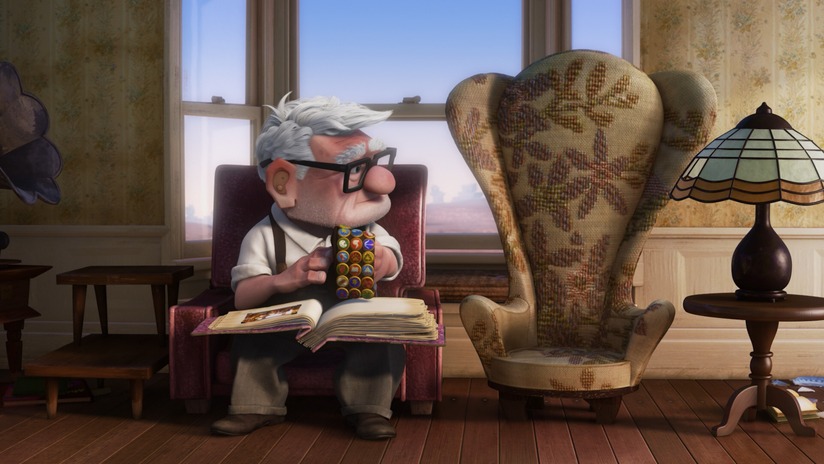 What they find at Paradise Falls and what happens there I will not say. But I will describe Charles Muntz’s gigantic airship that is hovering there. It’s a triumph of design, and perhaps owes its inspiration, though not its appearance, to Miyazaki’s “Castle in the Sky.” The exterior is nothing special: a really big zeppelin. But the interior is one of those movie spaces you have the feeling you’ll remember.

With vast inside spaces, the airship is outfitted like a great ocean liner from the golden age, with a stately dining room, long corridors, a display space rivaling the Natural History Museum and an attic spacious enough to harbor fighter planes. Muntz, who must be a centenarian by now, is hale, hearty and mean, his solitary life shared only by robotic dogs.

The adventures on the jungle plateau are satisfying in a Mummy/Tomb Raider/Indiana Jones sort of way. But they aren’t the whole point of the film. This isn’t a movie like “Monsters vs. Aliens,” which is mostly just frenetic action. There are stakes here, and personalities involved, and two old men battling for meaning in their lives. And a kid who, for once, isn’t smarter than all the adults. And a loyal dog. And an animal sidekick. And always that house and those balloons